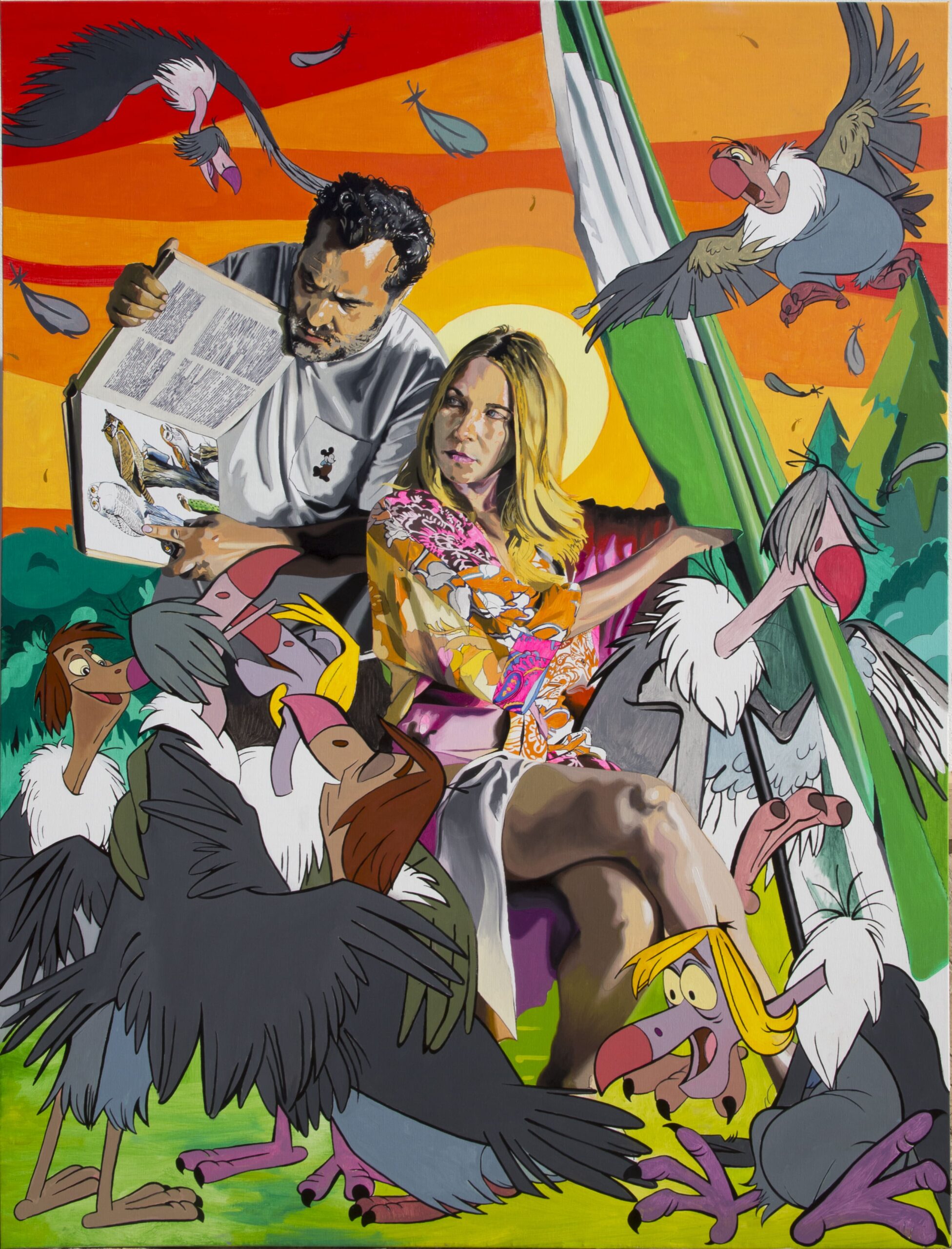 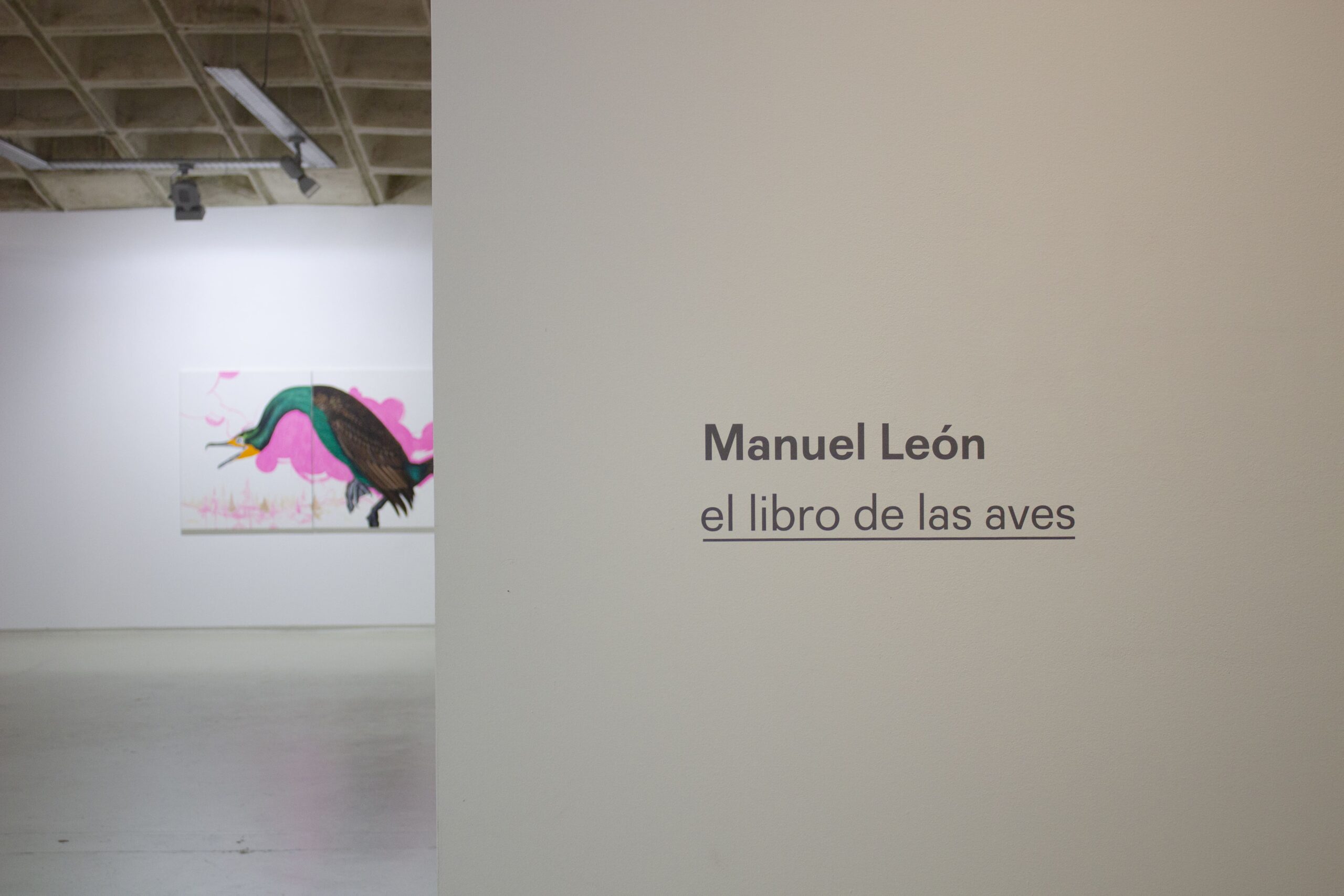 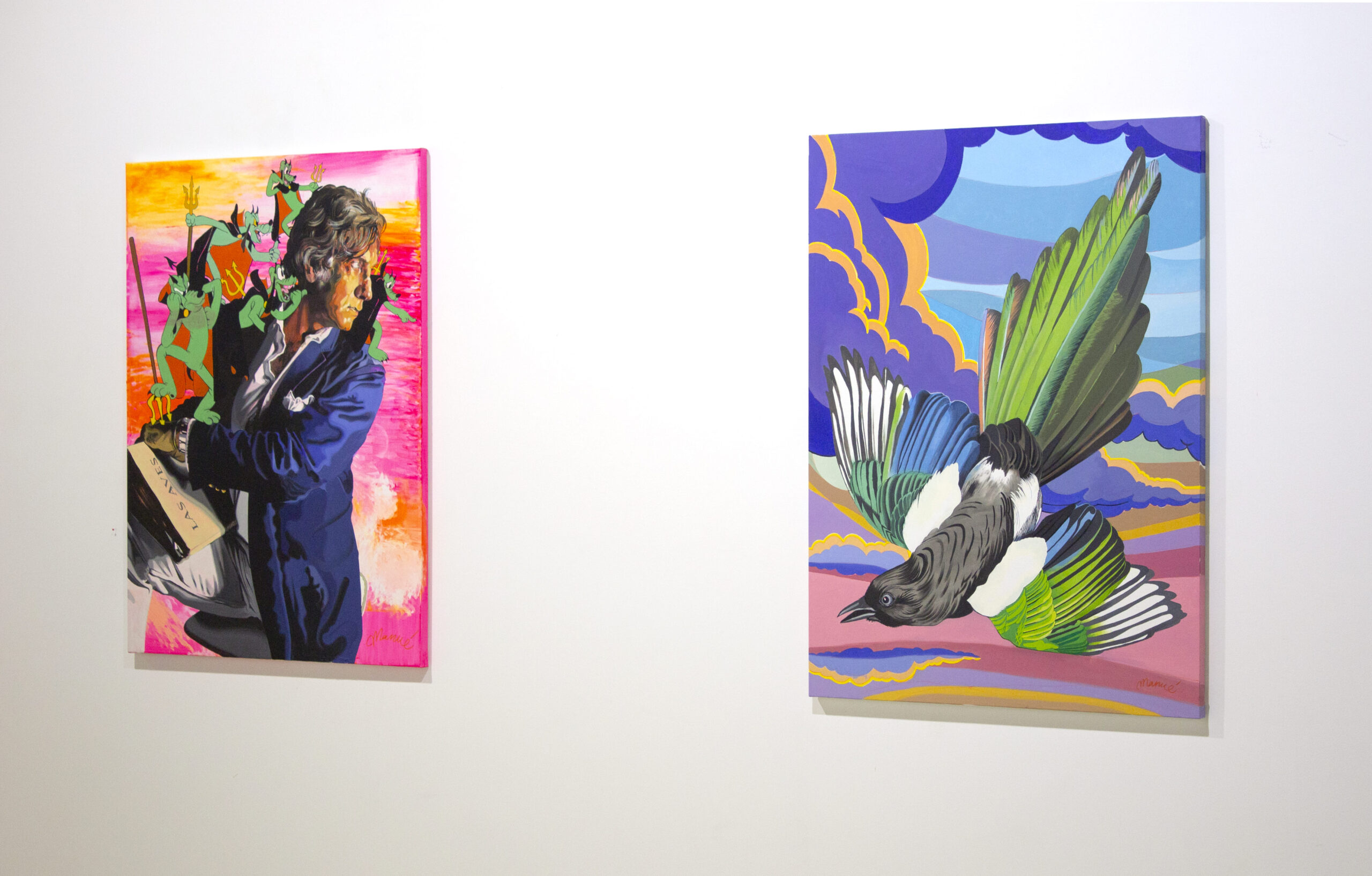 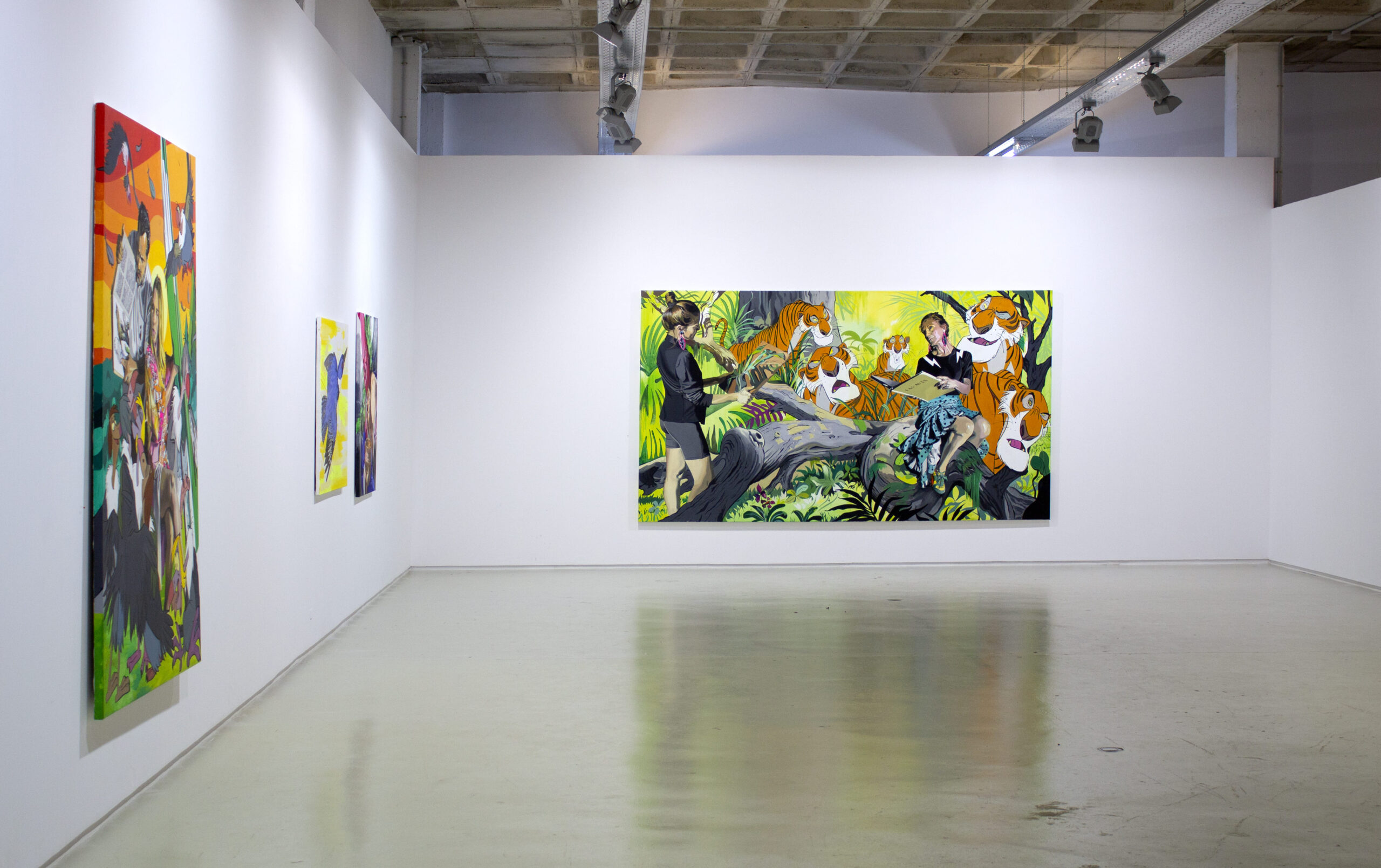 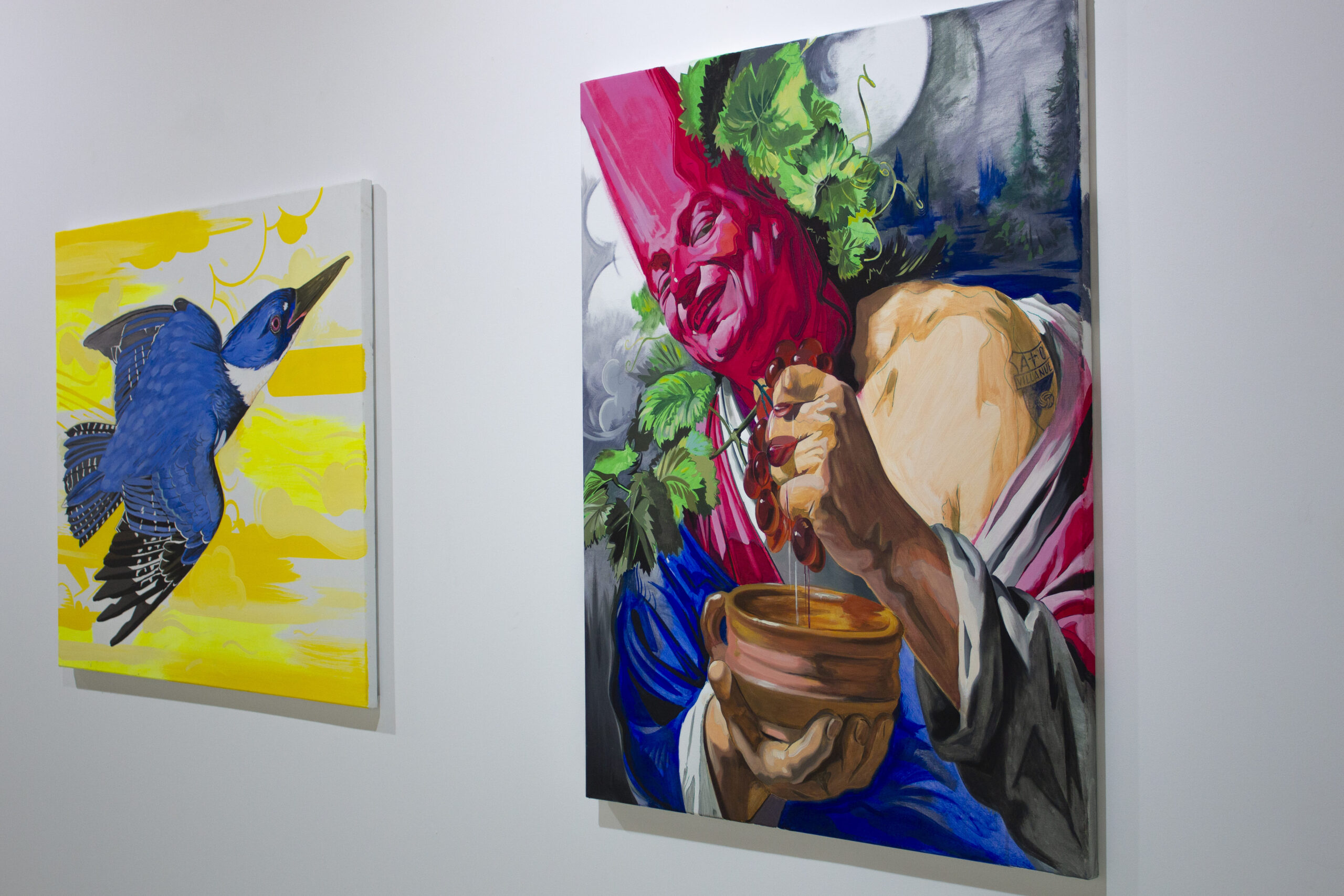 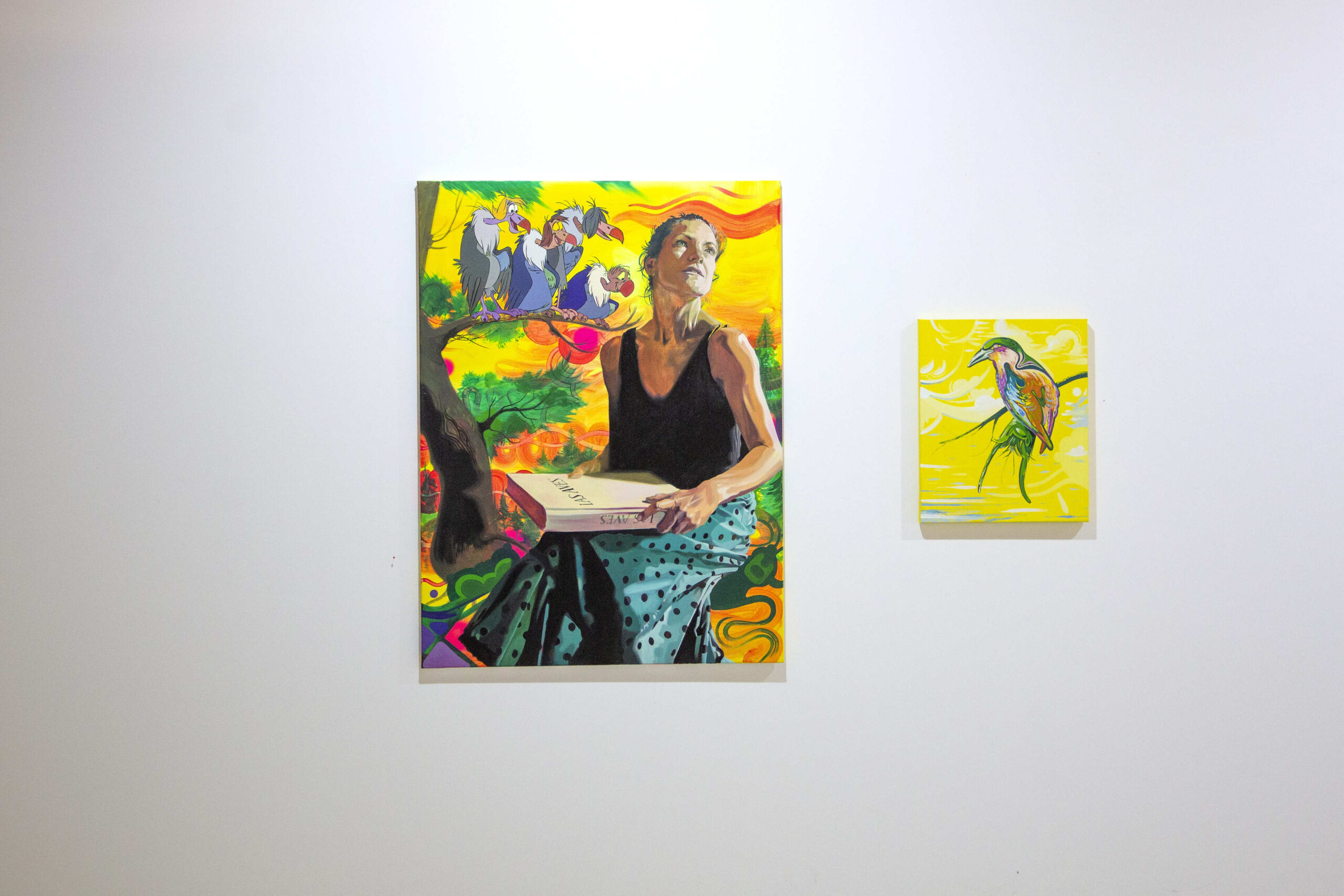 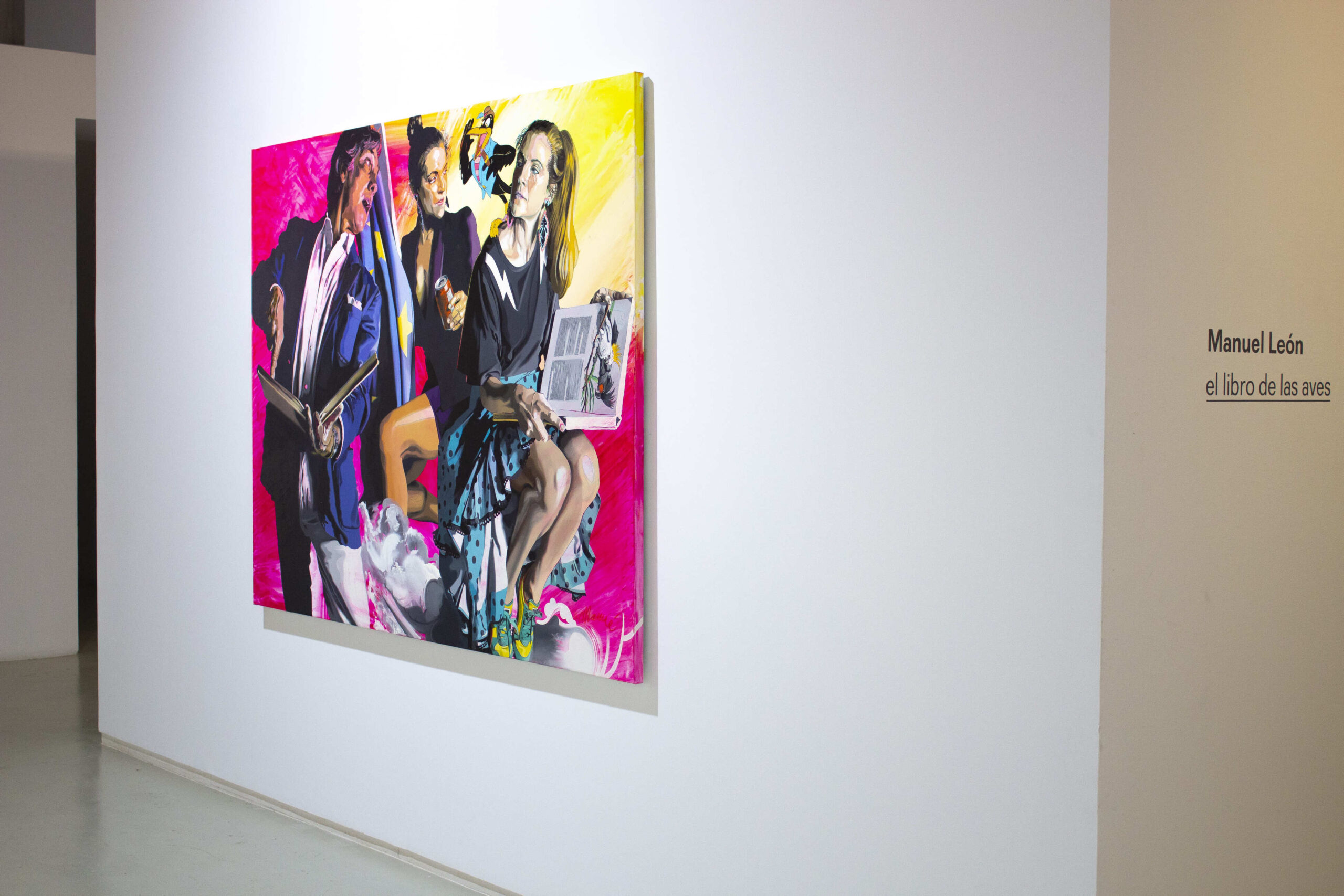 Manuel León’s first solo exhibition (Seville, 1977) at the Yusto Giner gallery marks a new beginning in his career and marks a turning point from previous themes and issues. This change is significant.It starts from a positive regression to childhood and the pleasure of painting, searching within the origin of the self that indeterminate primary stage that remains forever in us and gives meaning to who we are later on. Square one of the seeds of this self discovery could be found in “The Birds”, his favorite book as a child, where he first copied drawings at just five years old. At the same time he also watched many Walt Disney animated films as they fascinated him. Without input from anyone, his attention was hooked onto the moving lines that appeared on the edge of animated figures. In ‘The Jungle Book’ (1968), for example, that blurred border around some of the main characters is very clear when they move. From these two initiation pillars, we find the sap that nourishes this current transition towards a looser, less rigid style. This redemption of painting has opened up many possibilities to him. Going back to his childhood supposes the recovery of a decontaminated taste of prejudices; a kind of paradise lost, innocent and happy, to which to go back to and recover a place of freedom.

The name of this exhibition is an explicit tribute to the first book that marked him, “The Birds”.That ornithological manual, full of careful illustrations, belonged to his father, a bank employee who practiced painting as a hobby. He likely bought it in some old bookstore, probably because the colorful drawings of it, unusual at the time, caught his attention. One day Manuel cut out a seagull from one of his pages and his angry father placed it on top of a piece of furniture as a reminder. His father did not give it importance, but was disappointed that his son had vetoed that fantastic world he could access through images. Later his older brother lent the book to a cousin who raised birds on the outskirts of town, so “The Birds” was away from his house for over a decade. Although during his childhood he often remembered the book, he wouldn’t see it again until around the age of fifteen. Upon arriving at the Faculty of Fine Arts in Seville and having his own studio, this hardcover publication is one of the few things he takes with him. It becomes something like a personal talisman that he comes to from time to time from time to time. Its importance to Manuel cannot be overstated: on his father’s deathbed, the only thing he asks for in inheritance is the book. Of the three brothers, he was by far the one who felt the most attachment to that fetish object. Now the artist returns to it as a leitmotiv that leads him to enjoy his skill, betting on intuition and letting go without the need to justify himself or be judged by others. Recovering that cornerstone of the origin of his painting has something to do with his obsession with drawing, with that mysterious truth that incites us to certain places as a child and is capable of activating inexplicable springs within us.

In this exhibition the artist looks at some of Disney’s most charismatic sidekicks, with more works on the way, as the vein is prolific. Now we will see Kaa, Baloo, Jiminy Cricket, Tinker Bell or Sebastian at the very least. Other famous figures from the children’s television series that we saw in the eighties will also be added. Tom & Jerry, The Flintstones, Yogi Bear, Don Gato or Magilla Gorilla are likely to emerge sooner or later. Although they were created in the Hanna-Barbera studios, they also impregnated our childhood heritage, and are part of that indefinite magma associated with this early period of our lives. It is not a question of drawing exclusionary borders and going only along one path as those borders do not exist in our memories. Rather the opposite happens: any cartoon is likely to become useful material for Manuel León if it triggers something in him and fits into his composition. In his work, the backgrounds are just as important, or more so, than the protagonists. They support the structure of the painting and unite the whole. Now they have less and more hierarchical information, they are looser, the scene is perceived more clearly. In the largest canvas dedicated to Shere Khan (And if it were a problem of Beauty or The splendor of the Middle Ages, 2022), that jungle character is a nod to Henri Rousseau, the customs officer. An antagonist like this bengal tiger with rhythmic movements and sharp cynicism, could not be missing, monopolizes the maximum protagonism in this show that opens the series. ‘The Jungle Book’ is one of his all-time favorite cartoons, a free adaptation that differs quite a bit from Rudyard Kipling’s original. While the film version conveys an optimistic message about friendship, the book is somber and dark, a veiled critique of the noble savage myth. At the end of the story, Mowgli is helped by the vultures Buzzy, Dizzy, Flaps and Ziggy, who are clumsy and simple-minded, but wellintentioned. His shaggy hair reminds us of The Beatles, in vogue in the years of its premiere in theaters at the end of the sixties. His presence and continuous waiting has something gloomy that is not without humor, perhaps it could be interpreted as a particular ‘vanitas’, suitable for children, related to the cycle of life in Nature. It is no coincidence that this quartet flutters around in two works present in the gallery (And what are we going to do?, 2022; Self-portrait, 2022). The reticence in this motif has something existentialist about it. Even more so if the one that appears in one of them is its own author.

The new line of work that begins with ‘The book of birds’ is not exactly a complete reset, as there are elements that persist and are maintained from his earlier themes. The pace of change of Manuel León from one series to another is slow, as he becomes obsessed and gets so into the work that it is difficult for him to move on. It is not easy to leave stages behind for an investigative artist who is looking into every nook and cranny of the matter. It has happened to him with ‘Ribs’, where he has exploited the theme of the symbolic-historical in the beginning in 2017 to the material-surface of his last ‘plants’, from only a few months ago. Five years immersed in an adventure that ends now, in the late summer of 2022. One cycle closes, and another opens. Maximum expectation. Renewed spirits and rising motivation, an energy that allows it to flow naturally towards unexplored places where the work can grow and continue learning. Manuel affirms that he wanted to return to the scenes to amplify his work from an idiosyncratic territory of his temperament such as narrative, a personal language inspired by parables (common in the History of Art, but reviled a few decades ago by exegetes of the contemporary ), who without specifying anything or making an argument, turned against him with an iconoclastic attitude. Never further from the reality of 21st century painting, which luckily bets, with no prejudice, on a figuration freed from corsets, capable of empathizing with all kinds of audiences without exclusion. Perhaps that is one of the features that define the panorama today, the liberation of an ideological dogma that placed one canon of paintings above others. Manuel León, if he is true to himself, must position himself from that allegorical mannerism that substantia- tes his style, become strong in that bastion, let himself be carried away by his worldliness, which is extensive and full of nuances. Few people have the breadth to tell such a suggestive story from the pictorial, superimposing layers and intertwining stories.